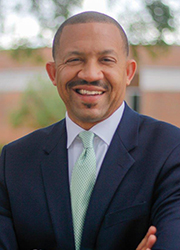 Dr. Larry Rideaux has served 23-years in postsecondary education with 19-years as acommunity college administrator. He is currently the Vice President for Student Development Services for Tarrant County College South Campus and has served in this capacity for approximately four years. A native of Texas, Dr. Rideaux was reared in the military and lived in England, Germany, North Carolina, Montana, Colorado, and Texas (Beaumont, Grand Prairie, Del Rio, and Austin) before reaching 18 years of age. He also enrolled in 13 different schools from 1st – 12th grade and attended Department of Defense schools in Europe. Dr. Rideaux graduated from South Grand Prairie High School in Grand Prairie, Texas and holds a B.A in Psychology from Lamar University – Beaumont, an M.A. in Counseling from Prairie View A&M University, and a Doctorate of Education in Education Administration from The University of Texas at Austin.

Dr. Rideaux’s career in education is marked by a variety of successive leadership roles and professional achievements affording him experience in many different aspects of community college administration. In 2016 he served as acting Vice President for Academic for Student Affairs as well as interim dean for Humanities. He also served as Associate Vice Chancellor (AVC) for Student Success at the Lone Star College System and was instrumental in helping the System evolve into an Achieving the Dream institution; an institution that works to develop evidenced based initiatives to increase the success rates of students-of-color, low-income and first- generation college students. Dr. Rideaux also served as Interim AVC for College Services, Executive Director for Achieving the Dream, Dean of Student Services & Enrollment Management, and Assistant Dean for Enrollment Services within the Lone Star College System. He has also served as Assistant Registrar at South Texas College of

Law and Campus Director for Multicultural Services at Texas A&M University – Galveston. In addition to his administrative experience, Dr. Rideaux has taught education and student success courses at Lone Star and Tarrant County College. He has also served as an on-site peer reviewer for the Texas Higher Education Coordinating Board along with serving on System-wide SACS committees throughout his tenure at Lone Star College.

Dr. Rideaux is married to Ronnette Rideaux who works as a school counselor within the Klein Independent School District and is currently a member of New Light Christian Center Church in Houston, Texas.